Together talks with Extensa, the development team behind Tour & Taxis’ Park Lane conversion to high-style living in the centre of Brussels.

It is all about being both active and tranquil: Extensa is planning to offer the best of both worlds for future residents in one of its newest projects at Tour & Taxis, Brussels. Extensa specializes in mixed-use developments, urban regeneration, and larger suburban residential communities. Their projects are already established throughout Belgium and Luxembourg, now including Tour & Taxis in Brussels as well as Cloche d’Or in Luxembourg City. Extensa says that it is committed to creating quality living and working environments where residents and companies alike can thrive.

Park Lane, as the new Tour & Taxis redevelopment is called, will be part of the neighbourhood located near to the bustling Gare Maritime – excitement will be just a stone’s throw away. However, Park Lane will also be bathed in nature, and will be a quiet, car-free environment that will allow residents to ‘unplug’ from city-centre living, whenever they feel the need.

Park Lane will provide a blend of nostalgic style with contemporary design and technology. The intention is to offer accommodation for multiple generations thanks to a combination of apartments, service flats and a residential care home. Extensa is working closely with a consortium of three architects to create an attractive location that reflects the singular energy of the Tour & Taxis campus.

Together had a chat with Extensa about the ground-breaking Park Lane redevelopment at Tour & Taxis.

What are the benefits of bringing such a historic site into the modern era?

The beginning of the 12th century saw Tour & Taxis play a key role as a logistical hub, inside the country and abroad. The majestic buildings are remaining witnesses to this historical era and radiate a breathtakingly nostalgic energy. In present days, the historical buildings have been given a new, contemporary look and functionality. This has been an ambitious plan.

Hotel de la Poste has recently been shaped into a beautiful event lounge with a private cinema in the ridge. Soon, the opening of a trendy bistro-restaurant will be announced. Gare Maritime, the former freight station, is being converted into an amazing covered city hub, with room for businesses and creative workplaces, shops, bars and restaurants.

Beside the full preservations of the heritage buildings, Extensa has also created architectural award-winning new buildings such as the Herman Teirlinkc and BIM building, and is now developing more than 700 iconic apartments near the Tour & Taxis park. 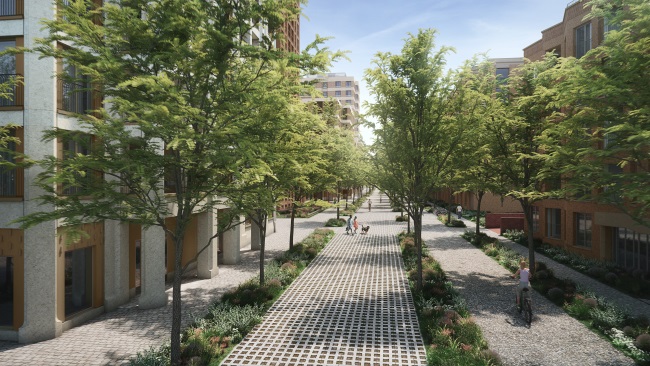 What do you think will happen with your transformation of the historic Tour & Taxis site?
The metamorphosis of Tour & Taxis in a modern city hub in honour of its former historical function of the early 20th century, will not only transform the site itself, but will have a huge positive impact on the neighbourhood. Belgian and international visitors and investors are finding their way to Tour & Taxis. In around one year from now, you won’t believe your eyes when the Suzan Daniel bridge will be built, connecting the two rivers, and the 40,000 sqm Gare Maritime will also be open to the public.

What were your inspirations as far as architecture is concerned?
We are always opting for quality, design and trust using materials by well-known brands and manufacturers with excellent services. The many influences of Brussels’ architecture, from the 30s and 40s, are playfully brought into the composition, from the Art Deco period to the modern industrial era. Bricks are alternated with a contrast of concrete ornaments. A granito mosaic tile can be found in most entrance halls and glass entrance doors lead to the hall with elevators and letter boxes.

Together’s motto is ‘Inspiring you to reach your dreams’. Has Extensa reached its dream with Tour & Taxis?
Not yet, but we are getting close. The Tour & Taxis site already attracts well-known brands, companies and thousands of visitors annually. They are the trendsetters in this vibrant, emerging neighbourhood. After having created a stunning place for work and recreation in recent years, we are now developing the missing link: a place to live in a stunning apartment on a historic site!
www.extensa.eu